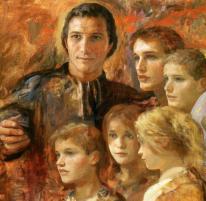 Marcellin believed it was his mission to education children not only about the christian faith but also about their surrouding world  and themselves. The Brothers continued in this spirit becomming known first and foremost as teachers. As the Brothers left France in the 19th century they established schools in the countries where they went and spread Marcellin's charism. Today there are less Brothers but the schools are established throughout the world many of which are staffed completely by lay teachers who keep the unique Marist flavour of these schools.

St Marcellin himself had this to say

“Remember that the young people you teach are your brothers and sisters; Your own likeness, bone of your bone, another you. These young people have the same heavenly Father, the same destiny, the same end, the same hope. They are called to the same happiness. They are your travelling companions in time. They will be heirs with you, sharing the joys of the homeland of heaven with you.”

The tradition of Catholic education that is known as "Marist" was begun by a French priest, Saint Marcellin Champagnat, in 1817. Today, Marist schools, colleges and universities are found in over seventy-five countries around the world, leading hundreds of thousands of young people to what St Marcellin believed each of them could be: good Christians and good citizens.

Dismayed by the ignorance he found among the rural children of southern France and spurred on by a strong faith, St Marcellin initially established a network of village schools. From the beginning the school reflected many of the qualities of St Marcellin himself: they were places where hard work and excellent achievement were valued, places where the individual was genuinely loved and prized, warm places where a strong family spirit was evident, places characterised by a lack of pretence, by simplicity and calm determination. A special concern was afforded those students who found school most difficult, because Marcellin himself had experienced those same difficulties. Above all, the schools were places that had the Gospel at their heart, encouraging students to respond to it with the same faith and generosity as Mary did.

In the almost two centuries since St Marcellin began his work, a tradition and a culture have grown up, a distinctive educational style. In New Zealand there are fifteen schools which share in the Marist Brothers’ spirit. These schools, in their attempt to personify the Christian faith in the New Zealand culture, have become known for their academic, cultural and sporting achievements, for their closeness to the communities they serve, and for the strong spirit which exists within them.

At the heart of the Marist school is a distinctive spirituality. Marists commit themselves to living the gospel of Jesus with the same faith, hope and compassion that Mary did. This is the essence of their particular spiritual tradition. Priests, Brothers, Sisters and Lay People are all members of the Marist movement.

Thus, Marists share in Mary's work of bringing Jesus to birth and being with the Church as it comes to life. And they do it in Mary's way. Like St Marcellin Champagnat, they believe the school is a privileged place to do this.

There is much to discover about Marist Education. Your son or daughter will be introduced to a College which has strong pastoral support for its students, families and teachers. You will find evidence of strong academic achievement and a unique cultural environment, aims at developing a full human person in preparation for life as a Christian and as a citizen. You will also find an active involvement in sharing the special spirit of St Marcellin Champagnat, and participation in liturgy and prayer.