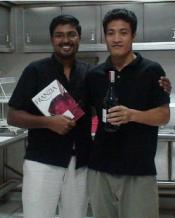 After knowing the Marist Brothers for some time, as a student, involvement in the young adult ministry, or through some experience of ministry with the Brothers, a young man may think about becoming a Brother. There are four main stages to becoming a Marist Brother:

A young man may consider himself a candidate and speak to a brother about his intention. At this point he continues his studies or in his work while keeping in touch with a brother who accompanies him in his journey of discovery, through reflection on his life and faith.

The first official stage of no fixed time is marked by the candidate becoming a hopeful in that he aspires to join the brothers as a brother. He continues to be accompanied by a brother (more frequently) in discerning the call he feels, talking about life and vocation and decision. At this stage he may well live in a Marist community that will help him in that discernment. An traditional word for this stage is 'aspirant'.

He becomes an applicant (the traditional word is 'postulant') when, with the support and backing of the brother accompanying him, he asks to begin the more formal process of membership into Marist Brotherhood. This involves continued accompaniment, in-put and letting go of other commitments to focus on studies and ministry that will prepare him to freely enter into the more intensive stage of the novitiate. This stage can be a period of six months to a year or even two.

In seeking formal admission to the novitiate, he becomes a novice and begins a period of two years inpersonal and spiritual formation, which provides an excellent and challenging programme in preparation for freely and wholeheartedly committing himself as a brother, professing his first vows. As our world grows smaller, a significant part of this process is insertion and exposure to other cultures and faiths outside his own cultural roots and comfort zones.

In completing his novitiate he continues professional and religious formation as a vowed Brother. There are two steps within this apprenticeship stage: (a) further study and religious formation and (b) field work, as it were, where he joins an active Marist community and exercises his ministry as Marist Brother in partnership with others who share in the mission. After a period of three to six years he makes life vows as a Marist Brother.

It is important to realise that the whole process is about freeing the person to live his deepest dream. In giving himself freely to God, he may discover that God's dream for him lies in another direction. It is the whole thrust of vocation ministry and the brothers and others involved to help young persons find their deepest dream and make it real, for their deepest dream will indeed be God's dream.

And so, the initial step in Marist formation is to make contact with a Brother, prior to joining our contact programme. This programme has been designed to meet an individual's needs as he searches out his answer to the question of Marist life. Anyone who'd like to receive vocational material, please contact the Marist Vocations Ministry.

Dear God,
I know you love me
and have great plans for me -
but sometimes I am overwhelmed
by the thought of my future.
Show me how to walk forward
one day at a time.
May I take heart
while I search openly,
learn about all the choices,
listen to others' advice,
and pay attention to my own feelings.
By doing these things,
may I hear your call
to a lifestyle and career
that will let me love as only I can,
and let me serve others
with the special gifts
that you have given me.