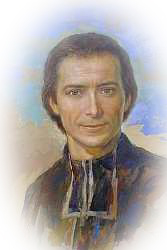 whose heart knew no bounds

St Marcellin Champagnat founded our worldwide community of Brothers. He followed his calling from God with the simple and ordinary Christian faith in his heart together with hard work. His passion and love of God at once drove and comforted him throughout his life, while allowing him to live surrounded by those who loved him and all they had built together.

The son of French peasants, Marcellin was born in the village of Le Rosey near the city of Lyons in 1789. It was the year of the storming of the Bastille, the start of the French Revolution. The following decades were extremely difficult for the French. It was with this background of religious, political, economic and social unrest that heavily influenced the path to foundation of a religious order and Sainthood that Marcellin’s life led too.

Marcellin was a typical illiterate French peasant when as a young boy a visiting priest suggested that he might like to train for the Catholic priesthood. The family had little means to send their son to the seminary but they were as determined as the young Marcellin and before long he set out on his path. Marcellin found the early years of his studies towards the priesthood extremely difficult. He was no natural scholar but through sheer will and hard work combined with prayer and the never failing support of his mother and aunt he was finally ordained as a priest in 1816.

During his studies Marcellin and a group of other seminarians had discussed forming a religious order under the patronage of Mary, the mother of Jesus. This dream was realised in the church of Our Lady of Fourviéres above Lyons, the day after their ordination. The group of young men together dedicated themselves to Mary as "The Society of Mary".

The beginnings of Marcellin’s dream

Marcellin's first and, as it turned out,only appointment as assistant priest was to the remote rural community of La Valla, not far from his home. Marcellin’s personal charism and sincerity led him to be become popular and respected by this parishioners.

France had been at war almost continuously for 26 years and public education in rural areas had collapsed. This background of no schools or education system lead Marcellin into a life changing event. One day, a young man of the parish called him to the seventeen-year-old boy, Jean-Baptiste Montagne, who was dying. What affected Marcellin so profoundly about this meeting was that Jean-Baptiste had never learned the most basic elements of the Christian faith. To Marcellin, the death of Jean-Baptiste at only 17 and in almost complete ignorance of the Christian faith was a tragedy. He decided he must act to ensure others did not suffer the same fate. This event, more than any other, set Marcellin on the path which would lead him to found the Brothers.

In January 1817 Marcellin bought a simple house in La Valla and recruited two young men, Jean-Marie Granjon and Jean-Baptiste Audras.  Like him, these young men were from peasant stock and together they formed the first community. The three of them came from humble backgrounds and were used to simple living and hard work. They carried this attitude into their new community, praying often and from their example others came to join them. In 1818 Marcellin opened the first Marist school whose timetable he designed in such a way to fit the farming needs of his parishioners (such as allowing children off school to help in the fields at planting and harvesting time). His fees for the school he set at a level he knew most rural families could meet. In fact, if he knew the family was unable to afford anything the tuition was free.

Marcellin and his community helped to support themselves and their school by doing what came naturally to them, they worked hard. The community carried out light manufacturing together such as forging nails which they sold. These efforts and living simply helped to pay for providing schools to the poorest.

From France to the world

Over the next 20 years Marcellin's recruits continued to increase in number and they first took the name of Brothers of Mary which eventually became Petits Frères de Marie or Little Brothers of Mary. (When they were officially approved by the Church they were given the name Fratres Maristae a Scolis having the initials FMS which which you find after Brothers’ names).To accommodate his growing congregation Marcellin began one of his greatest achievements: the building of a great stone house on a bare piece of land which would become the Hermitage. This first motherhouse of the Marist Brothers was largely designed and built by Marcellin.

By the time Marcellin died on June 6 1840, the order had 48 establishments in France and 278 Brothers. Today there are 5,100 Brothers working in over 80 countries. From small beginnings Marcellin’s dream grew and its influence spread to every continent in the world. It has reached to millions of students and their families, who proudly proclaim themselves ‘Marists’ or ‘Marist old boys’.

One of the proudest moments for the Brothers and Lay-Marists came in April 1999 when Marcellin was made a Saint (canonised) by Pope John Paul II. For this major event a special logo was chosen.

The Logo that was chosen for the Canonisation of Marcellin consists of three interwoven symbols.

The letter "M" at the centre has been a special Marist symbol from the early days, suggesting Mary, Marcellin, Marist and Mission. Planet Earth symbolises a mission to the entire world, every country and every diocese without boundaries. The essential spiritual dimension of the mission is suggested by the halo which encircles and completes the image.

St Marcellin in art and photos

Follow this link to download a copy of A Heart that knew no bounds – Saint Marcellin Champagnat - The life and mission
by Seán D. Sammon, fms  1999

Read more about the life of Marcellin Champagnat at http://www.champagnat.org/