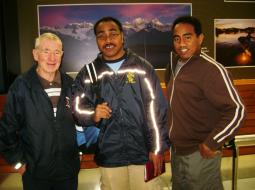 After a request from Bishop Paul Mea to Provincial Br Greg Ryan, Br Bernard Blewman went to investigate in 1983. Despite its isolation from the rest of the Province it was seen to be "Champagnat country", because of the isolation and the poverty. The first brothers went in 1984 and the post-primary school became St Louis High School.

In 1986, the brothers opened a formation house and the first local brothers formed a community on the island of Marakei in the nineties.

Since then a growing number of Champagnat Marists are working in St Louis and in the diocese, and there are at present four I-Kiribati brothers, one teaching in Samoa and the other three at different stages of continuing formation and study in Manila. The presence of the brothers is marked by internationality: brothers from Samoa, Fiji, Tonga, and New Zealand have been and are involved in this Marist mission.