Our early Brothers began building in 1841 and built using the French method of ‘pise de terre’, or ‘rammed earth’ as they could not afford the simple and faster method of building in timber. The purpose of the building was to house the Gaveaux printing press that was landed at Russell, at that time called Kororareka, from the Earl of Durham in June of that year.

Along with the printing press the Earl of Durham also landed eleven Marist Missionaries, a set of church bells and various other sundry goods needed to set up the new Marist Mission. A Marist Priest later in the year notes: “Our Brothers are laboriously tied up in erecting our printery under Mr Perret’s direction. This house is rising slowly in place. They have to do everything from scratch, go out and gather shells with which to make lime, burn them, break rocks, etc.”

After completing the building the Brothers then set up a tannery to provide leather covers for the texts they were to print. 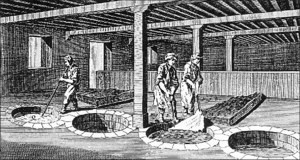 As the Brothers must have left their camera back on board ship we have to make do with pictures from a French Encyclopedia of that time showing tanners at work beside circular tan pits. The ones the Brother built behind Pompallier are still in use today for demonstration purposes. Their other tanning equipment is also to be seen there.

A scene familiar to our early Brothers as they came ashore after mission trips around New Zealand – Kororareka in 1844 with the Catholic Mission on the right in the sketch by Edward Ashworth [Alexander Turnbull Library, Wellington]