Characters from the past

Antoine Colombon was born on 31 January 1812 in the canton of La Cote-Saint-Andre, a town near Vienne on the Rhone river, south of Lyon. A tailor by trade, he entered the novitiate at the Hermitage in 1831, at the age of 19, and was received into the congregation under the name of Brother Michel. A member of the staff at that time was a young priest and aspirant to the Society of Mary, Jean-Baptiste Pompallier, whose task it was to teach the young brothers catechetics.

After his novitiate Michel appears to have been sent to the school at Vienne, but by the time he received his appointment to the first group of Marists to leave for the missions of Oceania he was back at the Hermitage. There he made perpetual profession in April 1834. On Christmas Eve two years later, he set sail for the Pacific with Bishop Pompallier’s party of Marist missionaries headed by St Peter Chanel.

Michel was still with the bishop when he and Fr Louis Servant arrived in New Zealand at Hokianga in January 1838. To him fell the groundwork of setting up the new mission’s base of operations, first at Totara Point, then at Papakawau, and finally at Purakau. Late in 1839 he was transferred to the bishop’s new headquarters at Kororareka in the Bay of Islands. He accompanied Pompallier on his first pastoral visit to Poverty Bay in March 1840 and helped Fr Petit begin setting up a new station at Kaipara in May.

As a number of the Marists found, Pompallier was not an easy man to work for. Michel was no exception. In addition, the brother was not getting the opportunity he wanted to work as a catechist. Matters came to a head in mid 1840 when he was back in the Bay of Islands. When in a fit of anger Pompallier told him to leave the house as he was of no use to the mission, Michel did so. But he remained a member of the Society, in name at least, until the beginning of 1845, and even after that date the Marists continued to refer to him as Br Michel – as such he is listed in the Society’s Ordo for 1851.

After leaving the mission, Michel appears to have settled in the Matauri Bay area where he made his living as a tailor. For a time, at least, he also acted as catechist and teacher for the local Catholic Maori on Sundays. In 1842 he was occasionally visiting Br Elie-Regis at Whangaroa, and by the end of 1843 had decided to return to the mission. He remained at Whangaroa until early 1845. It appears he left the Society after his retreat with Fr Forest, the provincial, at Mangakahia in January.

For the next five years, at least, Michel lived in Auckland working as trader and gardener.
In the latter trade he won something of a reputation, producing the first rock-melon grown in New Zealand, and being recognized as one of the first to introduce citrus fruits into this part of the Pacific. He also kept up his contacts with Maori. In 1847 he was witness to the marriage of James Maguire and the Rarotongan chieftainess, Te Paoro, signing himself Antoine Colombon.

There is no record of Michel’s movements between 1850 and 1870. It is possible, as some claim, that he went to Sydney and worked on the Australian gold fields for a time. By 1870, though, he was back in New Zealand, and living on the west coast of the South Island, in the little town of Reefton. Here he was known as Antonio Michel or, more commonly, as Jimmy the gardener, after his occupation. He laid out a garden for a Mr Lee in 1876, and when age forced him to abandon this work, he set up as a trader in confectionery and fruit.

He died on Monday, 14 March, 1880, aged 68 years, and was buried two days later in the cemetery on Buller Road under his adopted name of Antonio Michel.

Gabriel Rivat (Frere François) was born on 22 January 1808 at Maisonettes, a hamlet near La Vallaen-Gier (France). His pious family 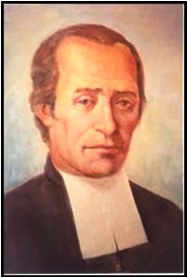 recited the rosary every day. When Gabriel was five years of age, his mother consecrated him to the Virgin Mary during a pilgrimage to Valfleury.

Father Marcellin Champagnat, newly ordained, was appointed to La Valla in 1816. Although Gabriel was only eight years old, he was one of the first children to attend the curate's early morning catechism lessons. At the age of ten he made his first communion an event that marked him for life.

Three weeks later he asked to join the young community that Marcellin Champagnat had founded on 2 January 1817. Although he was very young, Francois' fidelity was unfailing. In 1826, at the age of 18, he professed his perpetual vows; his joy was so radiant that Marcellin said to him, "I am jealous of your happiness!" He began his teaching career at the tender age of 12. During the morning hours he was in charge of the kitchen for the community and the day boarders, and in the afternoon he gave remedial lessons in reading, catechism and prayers.

Quite soon he was appointed director of a school. Marcellin, however, who had been struck by his exceptional qualities, called hirn to be his deputy and secretarv, as well as infirmarian of the community. In the latter task he showed special aptitudes. He treated the sick with medicinal plants that he collected or cultivated, he was skilled in counselling the sick, he prayed with them, and often obtained unexpected cures.

In 1839 when health was failing Marcellin asked the Brothers to elect someone to succeed him. Brother Francois was elected. When Marcellin died on 6 June 1840, Francois resolved to be "the living image of the Founder", and he asked the Brothers to witness to Marcellin in their lives. He remaincd Superior General of the Marist Brothers for twenty years. From Marcellin he had inherited a congregation of 280 Brothers. To Brother Louis Marie, his successor, he passed it on with more than 2000 Brothers.

From 1860 he lived at the Hermitage, the Marist sanctuary built by Marcellin. As Superior of the house he was for all a model of prayer and of the interior life. After he received communion one could observe the smile that lit up his face and revealed his joy at receiving the Lord.

He died on his knees as he was reciting the Angelus on 22 January 1881. The word that spread among the whole neighbourhood was, "The saint is dead."

Prayer to Ask for a Grace

You gave Brother François
the special gift
to care for and heal the sick,
or to prepare them
to accept peacefully the gradual failure
of their health.

Allow us to have recourse to him so that,
He may ask your Son Jusus
and Mary his holy Mother,
as he did during his earthly life,
to take care of the illness that we entrust to him.
Brother François, hear us,
and intercede for us.